Horchata de Arroz is a popular & refreshing Mexican drink made with ground rice, milk and cinnamon. Learn how to make this delicious drink with these step by step instructions!

One of the reasons Horchata is very popular in Mexico, is that it's the perfect pairing for spicy & flavorful meals. Every time I make Pozole, Entomatadas, or Bistec Ranchero, you'll see Horchata on my table....It's also my favorite drink and it'll be yours soon too 🙂

My recipe is for traditional Mexican horchata but I've seen versions around the web to fit today's different diet needs: Some use almond or coconut milk to make it lactose-free or they use no calorie-sweeteners for diabetic needs.

While they may taste good, nothing beats the taste of the traditional version! It's creamy, flavorful and so refreshing. I hope you treat yourself to the real deal at least once in a while.

I once tasted an Horchata from La Santisima Mexican Restaurant that is made with chunks of fruits (cantaloupe, strawberries, grapes) and pecans. It's so good! I think I'll do that to mine next time.

How to make horchata

How how long does horchata keep for in the fridge?

It should last about 3 or 4 days for the best taste. But I guarantee that you'll want to drink it all in a day!

What kind of rice can I use?

Do you need to wash the rice prior to soaking?

Yes! Since we'll be using the same soaking water to make the horchata, I recommend you wash it to have a clean drink.

Do you leave it in the fridge overnight or just out on the counter when soaking?

Place the bowl in the fridge since we'll be using that same water for our final Horchata drink. This water already contains a lot of the rice & cinnamon flavor and we don't want to waste it!

How can I make it dairy free?

Use almond milk or coconut milk. But you'll need to sweeten it with sugar or your favorite sweetener. This may change the authenticity and it may not provide the same results as this recipe.

You guys, if you go to a Mexican restaurant I guarantee you will see Horchata on the menu. You may have seen it as "Agua de Horchata". The wonderful thing is it's super easy to make and you can make it at home!

Other Mexican drinks you may enjoy!

Did you check out the step by step photos? With these, the recipe will be a success! If you still have any questions, you can leave a question in the comments or email me at ana@muydelish.com for a faster answer.....Enjoy! 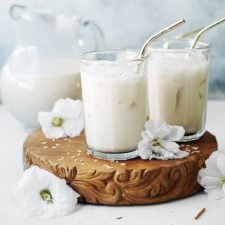 This recipe was originally published in July 2014. It has been updated to revise the content and photographs. The original delicious recipe remains the same. Enjoy!

PIN ME to make later!

I'm Ana Frias and I'm so glad you're here! I was born and raised in Sonora Mexico, love to cook food inspired by my native country and to share my delicious recipes with you. They're mostly healthy with the occasional indulgent recipe since it's all about balance right?