I wanted to share a Tamal recipe that is healthier and where the ingredients are accessible in any part of the country! Often times people tell me they can't find a certain Mexican ingredient in their neck of the woods so they miss out on wonderful traditional Mexican dishes. I'm happy to say this recipe gives everyone in the U.S. access to ALL the ingredients.

Sweet Corn Tamales also known as Uchepos, are a typical recipe from the state of Michoacan Mexico. This corn mixture does not require many ingredients as binding agents and that's what makes them so easy to prepare!We use the corn leaves to make the tamales so it's important to use fresh corn, and fresh corn is delicious during the late summer and early fall. Alternatively, If you're not using fresh corn, you can use the dried corn husks found at grocery stores.

Unwrap the leaves very carefully, trying to keep them whole, and trim off the points. Rinse the leaves and set them aside to drain.
Cut the kernels from the cobs as near to the core as possible.

I'm so happy to partner with Truvia as I've been using it for years! Ever since I became health conscious and decided to consume less calories, Truvia is my favorite natural sweetener.

Put the kernels, two cups at the time, into the blender and puree until very smooth. Repeat until all corn kernels are pureed. You may have to keep stopping the blender and releasing the blades; but do not add water. Otherwise the mixture will be very runny and hard to bind together.
Note: for this recipe I used Truvia packets but you can also use the spoonable version.

Enjoy these Chicharrones De Harina as appetizers while you make these Sweet Corn Tamales. 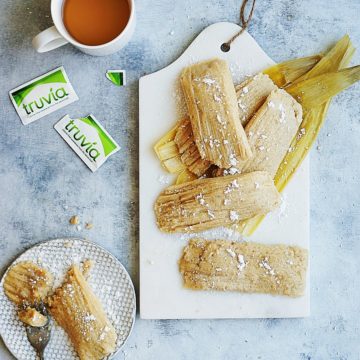 I'm Ana Frias and I'm so glad you're here! I was born and raised in Sonora Mexico, love to cook food inspired by my native country and to share my delicious recipes with you. They're mostly healthy with the occasional indulgent recipe since it's all about balance right?